This year the 2nd Annual Whitesboro T.E.A.L.® Walk for Ovarian Cancer Awareness will be held on September 10, 2016.  It’s organized by an amazing mother-daughter pair, Donna and Sarah Firsching, who were inspired to create the first walk of its kind in the area outside Utica, New York.  With the help of many dedicated volunteers, including Ovarian Cancer survivors Adeline VanDyke and Sabrina Fryman, they are determined to turn the event into something big—a fitting tribute to their mother and grandmother, Margaret Rose Manganaro, and a way to inform as many people as possible about the disease. 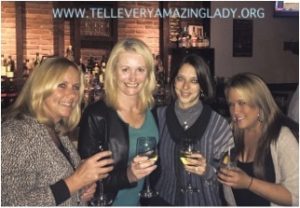 Margaret, who was originally from England, was a very family-oriented person who raised a son and two daughters, including Donna, with a husband in the military.  An extremely positive person who always bonded with others, she worshipped her six grandchildren and was especially close to Sarah, the only girl of the bunch.  At the age of 66, Margaret received a shocking diagnosis of stage IV Ovarian Cancer during a hysterectomy.  Although the disease was aggressive, she lived another four years, remaining upbeat and optimistic right through hospice care.

Sarah was a teenager when her grandmother died in March 2009 and grew up participating in many health awareness walks with her family.  When she realized how few Ovarian Cancer resources were available in her community, she decided to create a T.E.A.L.® Walk in Whitesboro to raise awareness and encourage early detection.  She reached out to T.E.A.L.® and worked closely with its executive director, Pamela Esposito-Amery, to create one of numerous T.E.A.L.® satellite walks that take place throughout the US.  Sarah’s mother was immediately behind her, and together they worked as a team to enlist volunteers and build up local support.

Held on October 3, 2015 at the Whitestown Town Park, the first walk was a huge success, drawing 100 participants and raising more than $5,000.  Music from a DJ set an energetic tone, while people entered raffles to win prizes including spa and wine baskets, summer fun packages, and tattoos.  Five survivors participated in the event, and the park was decorated with festive, informative signs about Ovarian Cancer symptoms.

One survivor heard about the walk on the radio and called the local police department to find out where it was taking place.  Coincidentally, the police officer who took her call had lost his mother to Ovarian Cancer and was eager to help.  The woman made it to the walk and participated in the survivors’ ceremony, giving a touching and impromptu speech about how her cancer had unfortunately just returned the week before.  The police department decided to become officially involved with the walk this year and is also forming its own team to participate.

Donna could not be any more proud of her daughter Sarah for spearheading the Whitesboro T.E.A.L.® Walk and wanting to honor her Nana in this outstanding way.  Since graduating from college in 2011, Sarah has been working in sales at a health insurance company.  Organizing an event on the scale of the 2015 walk was a first-time experience for her.  And she’s very much looking forward to the 2016 event—and to working with her mother and their cadre of volunteers to make it even bigger and better than before.

One of those volunteers is Sabrina Fryman, who finds a huge source of support in being involved with the Whitesboro T.E.A.L.® Walk.  She greatly enjoys participating in the grassroots campaign to promote and coordinate the event, including planning fundraisers, going storefront to storefront to enlist local support, and appearing on the radio to publicize the event.

A survivor of stage Ic Ovarian Cancer, Sabrina is committed to community outreach about the disease.  She’s also a dedicated runner.  After cancer surgery, she started training for her first half marathon as soon as she got medical clearance.  Her experience gave her the strength to push through, and she continues to run today, meeting her running partner at 5 am before going to work. 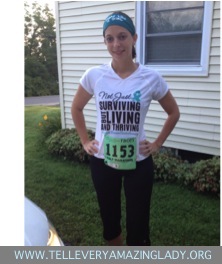 When she’s not running or walking for Ovarian Cancer, Sabrina works full-time as an accountant, part-time at a children’s clothing store, and part-time as a professional placement job recruiter and business consultant.  She’s also earning her second master’s degree in strategic human resource management, while raising a 15-year-old daughter who is a cheerleader in high school. 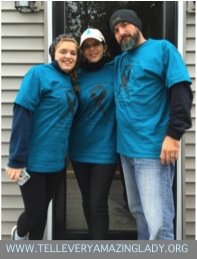 ( Sabrina (middle) with her daughter Ella and husband David)

T.E.AL.® is incredibly proud of the work that Sarah, Donna, Sabrina, and all the Whitesboro volunteers are doing in upstate New York.  All too often, Ovarian Cancer doesn’t get the attention that it should.  It’s important for everyone to be aware of Ovarian Cancer, its signs, and symptoms and for women facing the disease to receive the support they need.  The amazing ladies in Whitesboro wear teal bracelets every day, and people stop to ask about them all the time.  With each conversation, they help to educate the community around them.  And with each T.E.A.L.® walk that is organized in places like Whitesboro, the closer we come to making all of our communities warmer and more supportive places for those touched by Ovarian Cancer.