Ronni and Richard Gorman were childhood sweethearts.  The loves of each other’s lives, they started dating at the age of 16 and were married for 43 years.  When Ronni died from primary peritoneal cancer, which is treated exactly like Ovarian Cancer, on January 23, 2016, it was a terrible loss for Richard, his two sons, Jeff and Mike, and their wives, Marne and Jessica.  Every day they remember her strength and courage in the face of adversity—and in doing so, pay loving tribute to a remarkable and truly amazing woman.

Ronni beat the odds in her fight against this terrible disease.  Originally given a life expectancy of 3-5 years after diagnosis, she went on to live 12½ years, marching in 6 ®T.E.A.L. walks, attending the weddings of her two sons, and seeing the birth of her four grandchildren.

Her first grandchild became the namesake of the family’s team at the First Annual ®T.E.A.L. Walk in 2009, Brady’s Brigade.  As grandsons Blake and Dylan were born, the team became the Gorman Boys, and with the birth of granddaughter Hayley, finally the Gorman Gang, a name that the team keeps today and into the foreseeable future.  For the six years she walked in Prospect Park, Brooklyn, Ronni was able to be festive and enjoy seeing all the family and friends who came out to support her, as well as all the other women battling the disease. 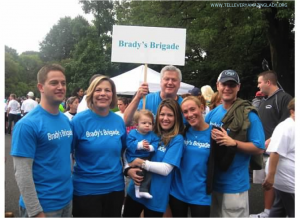 As a strong, kind, warm, and friendly woman, Ronni was uniquely private about her health.  Each year, she loved being a part of the ®T.E.A.L. Walk, but she never wanted the focus of attention to be on her and her struggles with various cancers.  Instead, she just wanted to have a good time, get some exercise, and raise as much money as possible for Ovarian Cancer research and awareness.  The cause was equally important to her sons and their wives, who involved numerous friends and colleagues in the event.  Marne was the instigator who discovered ®T.E.A.L. eight years ago.  One year, the Gorman family was pleased to be ®T.E.A.L.’s top fundraising team.  And Ronni was especially proud of her sons’ and daughter in-laws’ efforts to honor her and her bravery. 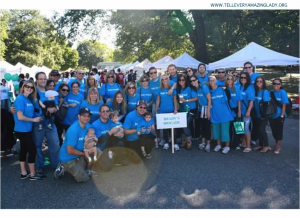 Today, one word stands out when Richard, Jeff, and Mike speak about Ronni: she was a warrior. According to Richard, she went through a total of approximately 150 chemotherapy treatments.  She was first diagnosed with stage III peritoneal cancer, a rare cancer that is treated in the same way as Ovarian Cancer, during a routine procedure to remove an ovarian cyst.  She underwent four abdominal surgeries over the twelve years, but the cancer was extremely aggressive to the point that a full remission was not in the cards.  The disease transformed into a chronic illness with Ronni generally in treatment the entire twelve years.  The cancer ultimately spread to her brain and developed in her tongue, neck, and lymph nodes, probably as a result of the accumulated toxicity of so much chemotherapy.  Eventually she needed a graft from her leg to reconstruct part of her tongue that was lost to the disease.  Towards the end of her life, she stayed at a free facility for cancer patients in Manhattan during the week, so that she could receive regular treatment at the hospital.  On the weekends, she returned to Long Island to rejoin Richard. 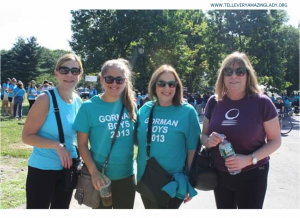 Throughout the Warrior’s battle, Ronni remained completely dedicated to her family and was determined to stay alive in order to enjoy as much time with her children and grandchildren as possible.  For more than a decade, she fought to keep the disease in check and to carry on as she had before her diagnosis.  That meant cooking large holiday meals for her family from scratch, starting weeks before the event and freezing food in advance.  It also meant remaining extremely close to her tight-knit group of friends whom she loved like sisters.  And it meant being the person in the community to whom neighbors would turn for advice—the one, for instance, who could be counted on to help choose a wedding dress. 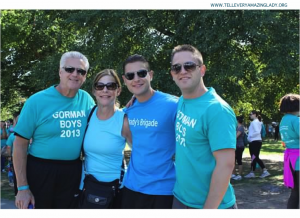 A wonderful mother, grandmother, wife, sister, and friend, Ronni was artistic, well spoken, and smart.  Every single day, her husband and sons remember how much she taught them and enriched their lives with her presence.  They are reminded of her in so many ways and feel her watching over them.  While incredibly difficult, their mother’s experience showed Jeff and Mike what is truly important in life: to recognize how precious our time here on earth really is, not to get worked up about trivial concerns, and not to take anything for granted.

The Annual ®T.E.A.L. Walk has been an important part of the Gorman family’s lives since the beginning, and this year will be no exception.  On September 10, the Gorman Gang will be bigger than ever, with as many of Ronni’s family and friends as possible gathering to walk in memory of an amazing lady and a life well lived. 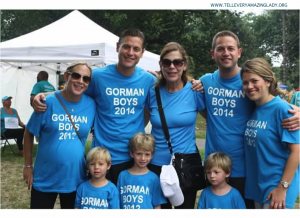 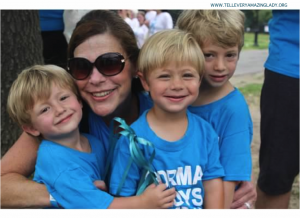