When Rose Kardashian found out that she had a recurrence of Ovarian Cancer in February 2015, her faith led her to choose and endure an aggressive treatment option.  Now, more than a year later, she is doing well and has become an advocate of cytoreductive surgery followed by hyperthermic intraperitoneal chemotherapy (HIPEC), also known as the Sugarbaker procedure.

The procedure, which has been used since the 1980s, is very intense.  First, the surgeon removes all visual evidence of tumors, sometimes including organs or sections of organs that the body can live without.  In Rose’s case, more than 200 tumors, some tiny in size, were snipped out, along with her spleen, appendix, peritoneum and other organs.

After hours of carefully examining the abdominal organs for tumors, the surgeon then attempts to kill individual cancer cells that may remain using HIPEC, or a hot chemo bath.  Chemotherapy drugs heated to nearly 108 degrees Fahrenheit are infused directly into the abdominal cavity for 90 minutes.  Evidence suggests that heating chemotherapy in this way allows it to get deeper into the body’s tissues than drugs administered intravenously, thus increasing the likelihood of killing cancer cells.  This is a form of cancer therapy that targets individual cells that may be floating around wreaking havoc, not just tumors attached to a blood supply.

This potentially lifesaving procedure regularly lasts 6-8 hours.  Rose’s surgery took 12 hours, and she was in the hospital for 3 weeks.  She came back little by little, slowly beginning to eat and walk again, until she was driving 3 months later.

It is important to note that this procedure is not considered standard treatment for Ovarian Cancer in the United States, so many women may not be aware of it.  Still, it is available at more than 100 academic medical centers in this country, as well as in many European countries.  The skill of the surgeon plays an enormous role in the success of the operation.

Rose encourages women who are interested in the procedure to do their research—to learn more about it by looking online and talking to their medical team.  YouTube has many informative videos.  Before choosing any surgeon, make sure to find out how many procedures the doctor has done and how well they have turned out.

Rose feels that God led her to choose this treatment option and helped her get her through it, and she is thankful to be enjoying life as much as she can now.  In 2014, she retired from a career at a nonprofit agency, where she worked with people with disabilities for more than 24 years.  Since she was 9 years old, she started sewing her own clothes.  Her love of sewing led her to a second career in fashion design, and she started a company, called Loosey Goosey Couture, that makes comfortable, chic, flattering, and easy-to-wear tops and tunics for women.  She also holds combined fundraisers and fashion shows, where a large portion of the proceeds from selling clothes goes to a nonprofit organization.  Rose is planning an event of this kind to benefit T.E.A.L.®

Her husband Johnny retired a few months ago, which has made their time together in New Jersey even nicer.  They have a son who lives in Vermont with his wife and 3 children, including a brand new baby girl.

A woman of faith, Rose does not consider herself especially brave or courageous in choosing to have the Sugarbaker procedure.  But like all women with Ovarian Cancer, she is.  Being diagnosed with a serious illness is a life-changing event, and it forces people to draw on reserves of strength they might not have known they had.  Rose says, “My faith and prayers from my family and friends lifted me up and kept me there until I healed.”  Rose is an amazing lady, especially in her determination to help others in a similar situation and to let them know about an important treatment option that could potentially give women many more years of life. 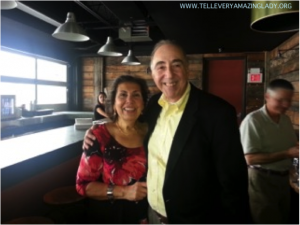