While talking to Simone, one cannot help but be struck by her courage. Receiving a diagnosis of cancer is often a traumatic time in a person’s life.  When Simone Courtlandt learned that she had ovarian cancer, it was November 5, 2012—just a week after Superstorm Sandy hit New York City, causing her family to be displaced.  Yet Simone got through that very difficult time just like she’s getting through her fourth round of treatment now—with the support of her family and friends and her faith.Until she was 46 years old, Simone lived what she considered a very normal life.  A former college basketball player at Syracuse University, she enjoys playing racquetball and works as a probation officer.  Out of the blue, she began experiencing excruciating pain in her abdomen three years ago.  Her doctors detected a mass that needed to be removed, but no one suspected anything like cancer.  Simone went for what she thought would be a routine outpatient procedure.  The day after she woke up from what turned out to be an 8-hour surgery, her doctor gave her shocking, life-altering news.

It was an enormous blow to her and her family, especially her sister Vanessa.  Still, Simone decided to grab the bull by the horns and do what she needed to do.  Despite her emotional turmoil and the physical destruction throughout New York, she began battling the disease with her family and friends by her side.  Vanessa in particular promises to do anything she can to help support her sister.  And through prayer, Simone finds the strength to go through treatment.

Simone first learned about T.E.A.L.® through a support group.  In 2014, the day before the 6th Annual T.E.A.L.® Walk in Brooklyn, she decided to participate and walked with her friend Linda Hill in Prospect Park.  Although the event was emotionally challenging, Simone also had a great time and learned a lot.

This year Simone wanted to go a step farther.  She formed Team Simone in order to spread the word about ovarian cancer and raise money for research.  Nearly 25 people joined her team, which raised about $4,400 to benefit T.E.A.L.®  What is especially impressive is that Simone organized her team in just three weeks, while also undergoing treatment. 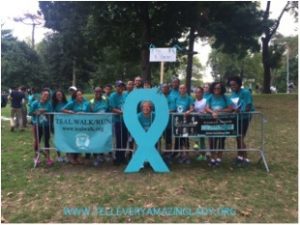 A week later, Vanessa formed Team Simone at the 2nd Annual T.E.A.L.® Walk in Savannah, Georgia.  Unable to attend the Brooklyn event because another sister was renewing her wedding vows on the same day, she decided to honor her sister by extending Team Simone across the country.  A total of 24 people wore teal backpacks, bracelets, and bandannas, and Vanessa’s husband grilled food while motivational and uplifting music played in the background. 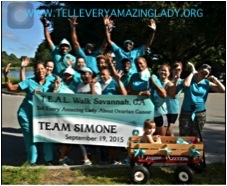 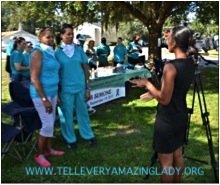 (Team Simone at the 2nd Annual T.E.A.L.® Walk in Savannah in 2015. Right photo with Vanessa being interviewed on the right.)

Both events—the walk in Brooklyn and the one in Savannah—were an enormous success for Team Simone and a powerful tribute to an amazing lady. Simone and Vanessa look forward to continuing the Team Simone tradition in years to come and to walking together in Brooklyn.  And although it took some time before Simone was able to talk about her experience with ovarian cancer, now she hopes that her story will be an inspiration for other women going through the same thing.  And with an amazing story like hers, her dream is sure to become a reality.