After Nancy Irizarry was diagnosed with ovarian cancer, she began volunteering to help other women facing the disease.  She participated in T.E.A.L.®’s annual walks in Brooklyn, bringing together teams of up to 75 people to support her and help raise money for ovarian cancer research.

Still, she wanted to do more—especially for people in her own neighborhood.  There weren’t any walks for ovarian cancer in Woodbury, New York, located about 55 miles outside of New York City.  So, working with T.E.A.L.®, Nancy decided to create her own. 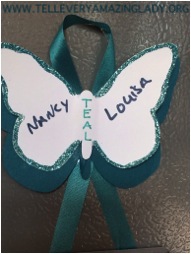 (This butterfly, which also includes the name of T.E.A.L.® co-founder Louisa McGregor, inspired Nancy to create her own T.E.A.L.® Walk.)

The First Annual Woodbury Parks and Recreation Dept. T.E.A.L.® Walk, held on September 29, 2013, was also T.E.A.L.®’s first satellite walk ever.  A great success, it was followed up the next year with an even bigger walk that included nearly 200 participants and raised over $12,000 for ovarian cancer awareness and research. 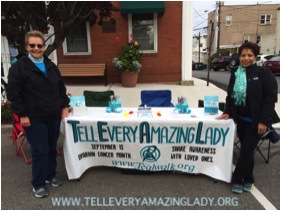 (Joan Shuart, who recently passed away, and Nancy at a Cheese Festival to promote the 2nd Annual Woodbury Parks and Recreation Dept. T.E.A.L.® Walk, September 2014)

Nancy planned to continue the tradition with additional walks in Woodbury, but ended up moving to a different town.  Still, her legacy lives on, as others follow her example and organize T.E.A.L.® satellite walks in locations across the United States, including in Connecticut, Georgia, Alabama, and Pennsylvania.

Planning those first two walks in Woodbury was an entirely new experience for Nancy. She had previously worked as a sales person at an insurance company and was familiar with cold calling.  Putting together a community event, however, meant going door to door throughout the neighborhood to ask for help, organizing outreach and education tables, and managing a lot of logistics. 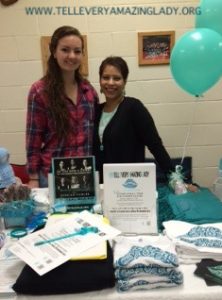 Yet Nancy was determined to do all she could to support other women like her who have been diagnosed with ovarian cancer and to tell every amazing lady about the disease.

Like many others, Nancy was shocked to discover that she had ovarian cancer.  Although she had been experiencing vague symptoms for a year, her doctor thought they were due to stress at work or to early menopause.  Her levels of CA125, which can sometimes indicate the presence of ovarian cancer, were normal.

It was not until Nancy was admitted to the emergency room with severe pain on the left side of her back that doctors detected ovarian cancer, as well as a cyst on her aorta.  She was transferred to the hospital and waited a week until the complicated surgery to remove both the ovarian cancer and the cyst could be performed.

Thankfully, the operation was a success. Since that time, now almost ten years ago, Nancy has discovered that she has a rare form of ovarian cancer, called a granulosa cell tumor, which is characterized by multiple recurrences.  Each time the cancer comes back, she can be cured with chemotherapy and radiation.  She’s already had four recurrences, the most recent in January 2014.

Despite these challenges, Nancy is a truly amazing lady.  Starting in 2007, she began volunteering with the Woman to Woman program, where she visits with other gynecologic cancer patients and gives them hope, support, and understanding.  She’s also been a volunteer with T.E.A.L.® since its earliest days.  In addition to launching the Woodbury T.E.A.L.® Walk, she is involved in many other T.E.A.L.® activities and was featured as a model in its 2014 MTA subway and bus advertising campaign. Nancy will also be featured in an upcoming T.E.A.L.® PSA video.

Today, Nancy is doing well and is thankful for the love and support of her husband, Jose , and her 32-year-old son, Nelson.  She wants to tell every amazing lady to take notice of their bodies, to listen to their bodies, and if there’s anything unusual that lasts for longer than two weeks, to go get it checked.

Thank you to Nancy for all the amazing work she’s doing on behalf of T.E.A.L.® and ovarian cancer.

(Team Fancy Nancy, with 50 of Nancy’s friends and family, at the 2015 ®T.E.A.L. Walk in Brooklyn)
Written by Jennifer Moon
Recent Posts