Theodora Blanchfield became involved with T.E.A.L.® in the summer of 2016, when her mom was in remission from ovarian cancer.  She’s a blogger, and it’s always been important for her to use her social media platforms to raise awareness about causes important to her.  She started posting and blogging to celebrate her mom and other ovarian cancer survivors.

That September, Theodora and her mom watched the T.E.A.L.® Survivor Ceremony during T.E.A.L.®’s Annual Walk/Run and vowed to be there together ever year.  After her mom passed away, Theodora continued to participate in the walk with her friends.

On March 18, she will be running the 2018 United Airlines NYC Half as part of Team T.E.A.L.®. She’s run more than 30 half-marathons already, and her goal for this race is just to have fun and enjoy the new course! 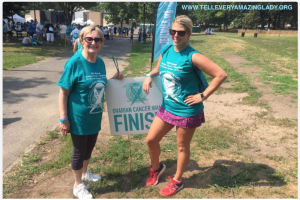 Theodora loves running, and it’s given so much to her.  It’s helped her to believe in herself, to accomplish things she never thought possible, and to stay mentally healthy.  Since losing her mom, running helps her fight off depression, stay centered, and blow off steam during a difficult time.

If Theodora had the power to change one thing related to ovarian cancer, she’d end it.  Barring that, she’d make it possible for the disease to be detected at earlier stages through improved testing.

This Saturday, when she runs the 2018 United Airlines NYC Half, she’ll be thinking about her mom and sending her a message of love and strength: “You did not lose the fight.  You fought with everything you had, but some rogue cells had their own ideas.”

Thank you to Theodora for running with Team T.E.A.L.® and continuing to raise awareness for ovarian cancer!