Madison Kircher found out about Team T.E.A.L.® when she was looking online for a charity to run the 2018 United Airlines NYC Half with.  She immediately knew that the organization would be a great fit.

Madison’s grandmother lived with ovarian cancer for nearly ten years.  She was, and continues to be, Madison’s model for what grace and strength look like, particularly when faced with difficult challenges.  Madison is running the race for her and is proud to be raising awareness of ovarian cancer as part of Team T.E.A.L.®.

If she could choose one thing about ovarian cancer that she could make better, she would focus on early detection.  All too often ovarian cancer is caught only at an advanced stage.  A screening test, combined with greater knowledge of the signs and symptoms of ovarian cancer, would help more women live longer, healthier lives. 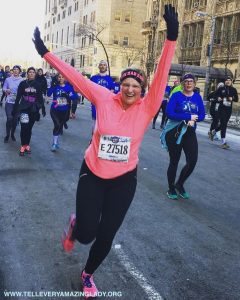 Madison keeps healthy by running, and it’s also something she loves to do.  When she’s running, it’s the only part of her day when she doesn’t have to think about anything other than putting her feet in front of her and moving forward.

Her goal for the United Airlines NYC Half is to finish strong and injury-free.  Of course, breaking her record from last year wouldn’t hurt either!