Conner Elliott joined Team T.E.A.L.® after hearing about the organization through his running community. Originally interested just because he thought it was a good cause, Conner discovered after telling his father about T.E.A.L.® that his aunt passed away from ovarian cancer. Conner’s story is an important reminder to continue the discussion around ovarian cancer. You may learn something surprising, and you will get a better idea of your personal genetic history!

Conner’s goal for the half is to finish in under 2 hours. His favorite part about running is that you can get lost in it. When running, you can enter your own zone and lower your stress levels. 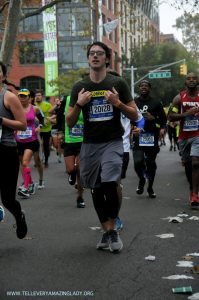 If Conner could change anything related to ovarian cancer, he would like it to become more known. Often when people hear cancer, they think breast, lung or skin cancer. With the number of people affected, he would like to increase awareness about the disease.  He understands that ovarian cancer is a hard path to travel, but wants to remind readers that with T.E.A.L.® you will find a support system.

Conner encourages supporters to get involved with T.E.A.L.® or a cause they care about. In his words, “It’s never too late to get involved! If you hear about a cause you support, support it! It can be hard to reach out when you’ve never done so before. That’s why you just have to jump in. If you can’t support by donation, spreading the word is just as valuable.” Thank you Conner for spreading the word and raising awareness on T.E.A.L.®’s behalf!