As a Youth Ambassador for T.E.A.L.®, Sarah Dahdouh (above) is committed to increasing awareness of ovarian cancer on the West Coast.  When her Auntie Mimi passed away over the summer, Sarah went online to find out more about the disease that had taken her life.  She wasn’t able to find many resources on the West Coast, but reached out to T.E.A.L.® to become involved cross-country.

Sarah’s background is a perfect fit for being a T.E.A.L.® ambassador.  She graduated from UCLA last spring with a degree in psychology and a minor in philosophy, while also being pre-med.  She is now back in the Bay Area, drawing on her connections in San Francisco and Los Angeles to “tell every amazing lady about ovarian cancer®”.  She works as a speech and debate coach for high school students and is taking a year off to study for the MCATs, before applying for medical school next year.  Currently, she is torn between wanting to specialize in pediatrics or oncology.

Sarah has begun speaking at various events on behalf of T.E.A.L. ®, interviewing people, and helping to extend the organization’s reach to California.  As a former Girl Scout, she has a strong interest in educating girls and young women about the signs and symptoms of ovarian cancer.  A long-term goal is to create a large T.E.A.L.® event, such as a satellite run/walk, in the Bay Area, L.A., or the Central Valley.  She also wants to extend T.E.A.L.®’s efforts in visibility by covering a City Hall building or other prominent space with bright teal lights.

The woman who inspires Sarah’s efforts on behalf of T.E.A.L®, Marianne, or “Auntie Mimi,” was extremely close to her.  When Sarah was growing up, her aunt was always there for her and her brother, whether they were competing in dance, soccer, swimming, or water polo.  A warm, excited, and optimistic person by nature, Marianne did not have children of her own, and Sarah felt like her adopted daughter.  Marianne would always call or email her. She was extremely supportive and would make the effort to be constantly present and involved in her life. 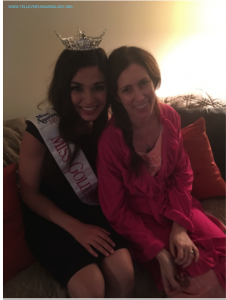 Sarah was in college in Los Angeles when she heard that her aunt had been diagnosed with an advanced and aggressive form of ovarian cancer.  The news came as a big shock.  It was difficult to visit because her aunt lived in Fresno, and Sarah didn’t have a car.  Marianne’s prognosis was poor—she was given six months to live—and she became very weak.  Still, the doctors commented on how remarkable it was that she managed to walk around and joke with people.

After three days of being given her prognosis, Marianne’s condition went downhill extremely quickly.  While Sarah and her family were on the way to see her in Fresno, Marianne died, just 30 minutes before they arrived.

Today, Sarah wonders whether her aunt had symptoms that might have served as a warning sign—whether there was anything that her aunt might have gotten checked earlier so that they could have had more time together.

Sarah’s done a lot of research on ovarian cancer, and some of the symptoms, like constipation or bloating, seem almost “normal.”  Nobody thinks that much about them, although they can sometimes be a sign of a more serious condition.  So Sarah has made it her mission to “tell every amazing lady®”: “It’s more important to know what’s causing an issue than to worry about being judged.  If you’re having any concerns about anything, go to the doctor.  You may actually save your life.” 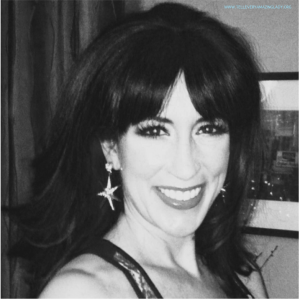