Now a third-year graduate student in pharmacy school, Mandy Irvin is committed to helping people improve their health.  She and her classmates regularly participate in fundraising activities to support different causes, such as diabetes, autism, and leukemia and lymphoma.  So it’s no surprise that when one of her closest relatives was diagnosed with ovarian cancer, she wanted to do something to fight back against the disease, which strikes about 22,000 women in the US each year.

T.E.A.L.®’s annual Walk/Run, held in September in Prospect Park, Brooklyn, is its biggest event, with thousands of participants.But a number of other events, organized by T.E.A.L. supporters, take place around the country at various times during the year.After Mandy’s aunt, Stacey Bentley Rowell, was treated for ovarian cancer and went into remission, Mandy wanted to create an event to honor her. She proceeded to organize a T.E.A.L.® Walk in Savannah, Georgia, where she is currently studying to become a pharmacist.

As is the case with many women, Stacey’s diagnosis came unexpectedly.  At the end of 2012, she was scheduled for a hysterectomy to relieve painful menstrual cramps that she had suffered for a long time.  She was 39 years old, younger than most women diagnosed with ovarian cancer, which generally develops after menopause.  During the procedure, a tumor was discovered.  Luckily, it was caught at an early stage, when the prognosis is very good.  If ovarian cancer is diagnosed and treated before it has spread to surrounding organs or tissues, more than 90% of women will survive at least 5 years.  Unfortunately, only about 15% of ovarian cancers are found when they’re still at stage 1.

Mandy and Stacey have always had a very special relationship.  Stacey is the youngest of seven siblings, including Mandy’s mom.  Only ten years apart in age, Stacey and Mandy talk at least once a week and text each other frequently.  A dental hygienist, Stacey is a very giving and supportive person.  According to Mandy, she’s never heard a harsh word come out of her mouth.

Stacey began chemotherapy in January 2013 and was in remission by the fall of that year.  At the time, Mandy was living in New York and working towards her second bachelor’s degree.  Later that year, she moved back to her home state of Georgia to study pharmacy at South University in Savannah and became passionate about raising awareness for ovarian cancer.

Mandy looked online for a way to organize her own local fundraising event and found T.E.A.L.® and its chief executive, Pamela Esposito-Amery.  She immediately liked how easy it was to create her own T.E.A.L.® Walk. Her experience with T.E.A.L.® enabled her to become involved in fundraising for ovarian cancer in a way that felt right for her and her community.

Savannah’s first T.E.A.L.® Walk was held on November 8, 2014 at Lake Mayer Track.  The day turned out to be beautiful.  Stacey and her two daughters traveled from Newton, Georgia for the event.  Mandy made her a special care package that included a water bottle, bookmark, and lapel pin in support of ovarian cancer.  With Stacey at the lead, a group of about fifty participants made a triumphant lap around the track.  Many of them were pharmacy students, and the dean of activities also made an appearance with some friends from church.

The pharmacy students did more than just walk.  They also offered free health screening services for the participants, including tests to measure blood pressure and blood sugar and calculations of body-mass index.  In addition, Mandy is a member of the Kappa Psi-Delta Omega Fraternity, a professional pharmacy fraternity.  She was able to partner with Kappa Psi, so prospective members could support the T.E.A.L.® Walk as part of their pledging process.

Mandy ended up raising more than $1,800 for ovarian cancer research and awareness, well over the $1,000 goal she had set for the event.  Most of the money came from selling ovarian cancer merchandise, including T-shirts, teal ribbons, car magnets, and stickers.  Also on offer were ovarian cancer wristbands bearing the words, “Hope,” “Survivor,” “Faith,” and “Strength.” In addition, local businesses donated items that were sold to participants in a silent auction.  By all measures, the event was a success.

Mandy wants to hold another T.E.A.L® Walk in Savannah again next year.  She would also love to expand her efforts in support of ovarian cancer to include the Kappa Psi fraternity nationally.  As a future pharmacist, she wants patients to be empowered to take care of their health and to learn important facts about ovarian cancer.  For instance, many women don’t realize that the Pap smear, which is extremely effective at detecting cervical cancer, does not catch ovarian cancer.  Currently, there is no way to screen for ovarian cancer, which makes research in this area especially important.

Aunt Stacey is doing well, with scans every six months to confirm that her cancer is in remission. Her levels of CA125, a protein in the blood that can signal the presence of ovarian cancer, are at their lowest since she began treatment.  And as usual, she and Mandy keep in touch regularly.  Together, they’ll continue to raise awareness and ® tell every amazing lady about the signs and symptoms of ovarian cancer. 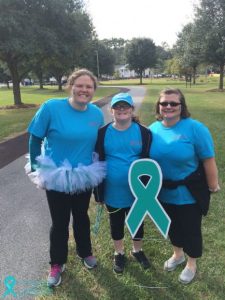