A lot of people think that ovarian cancer only affects older women, but Julie Antonecchia knows all too well that isn’t the case.  She was diagnosed at the age of 26, just a few months after getting married.

In the fall of 2008, Julie was preparing for her upcoming wedding.  While working at a boutique, where she was standing on her feet for long stretches at a time, she was dieting and exercising more than usual.  She felt tired, like she was coming down with a cold, but she was also experiencing a sensation of pressure on her bladder, abdominal pain, and irregular bleeding.  Two doctors diagnosed an inflamed bladder, a condition that typically resolves on its own.  Julie was reassured, but she still didn’t feel quite right.

Julie and her husband celebrated their honeymoon in Jamaica in October, although her symptoms started to worsen.  By February 2009, she felt like she was coming down with the worst cold ever.  Intense stomach pains eventually drove her to the emergency room.  At first, doctors thought she was pregnant because they saw a large mass on her ultrasound tests.  After she had a CT scan, they realized that there was actually a 2-3 pound tumor on her right ovary.  Julie had an oophorectomy, a procedure to remove her ovary.  To her shock, she was diagnosed with ovarian cancer—the last thing a 26-year-old newlywed would have expected.

Luckily, Julie’s tumor was caught at an early stage, and the type of cancer she was diagnosed with, called a dysgerminoma, has a high cure rate.  Dysgerminomas are uncommon, making up only 2% of ovarian cancers, and most occur in women younger than 30.  They develop when the cells that typically become eggs start to grow out of control in the ovary.  Even after surgery and chemotherapy, many young women with dysgerminomas are able to go on to have children.

Julie underwent three rounds of chemotherapy to ensure that no cancer cells remained following surgery.  Her husband and her friends helped her through that difficult experience, and she had follow-up check-ups with her oncologist for a year.  After that, she was happy to hear that she was no more likely to develop ovarian cancer again than a woman who has never been diagnosed.

After her treatment, Julie participated in the first T.E.A.L.® walk in 2009 as part of Team Babster.  Her husband had grown up with Craig Tull, who had recently lost his mother Barbara to ovarian cancer.  It felt right to support the Tull family, to commemorate Julie’s own struggle with ovarian cancer, and to honor the other amazing ladies whose lives have been transformed by the disease.

This year on September 6, Julie will be running the T.E.A.L.® 5K as part of Team Babster.  She loves being part of a community connected by ovarian cancer and witnessing what a difference T.E.A.L. has made to so many people in such a short time.  She enjoys meeting other ovarian cancer survivors at the event, seeing the T-shirts that teams make to honor loved ones, and learning the names of individuals who’ve battled against the disease.

Nowadays, Julie is enjoying spending time with her husband, a movie buff like herself.  She likes to run, while her husband goes on long bicycle rides.  Together they care for their two French bulldogs and don’t have immediate plans for kids.  Julie works as a secretary in a special education office, recently completed her associate’s degree by taking classes at night, and intends to pursue her bachelor’s degree.  She’s so appreciative of the friends who supported her, even as they were facing such different problems and concerns in their lives.

Ovarian cancer can strike anyone, across lines of age, ethnicity, and race.  Although Julie doesn’t know other women her age who’ve had a similar experience, she met a lot of older women with ovarian cancer during her treatment.  And like so many of them, she hopes that every amazing lady will gain a better awareness of the symptoms of ovarian cancer, which can be so vague and associated with other conditions, such as uterine tract infections or irregular periods.  Julie knows that it’s crucial to listen to your body.  If something doesn’t feel right, go see a gynecologist, and get a second, or even a third, opinion.  It’s your body, and you owe it to yourself to take very good care of it. 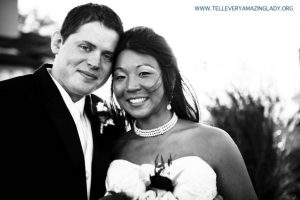