Tornadoes are not common in New York City.  But on September 8, 2012, the first time that Team Margie’s Meatballs participated in the T.E.A.L.® Walk, a tornado tore threw Rockaway Beach in Queens and made landfall in the Brooklyn neighborhood of Canarsie.  For Marissa Sazer, who had recently lost her mother to ovarian cancer, the unusual weather was a sign that Margie was still present, playfully wreaking havoc with the elements and watching over her from heaven.

Food has always played an important role in Marissa’s family.  Long ago, her grandmother started hosting weekly dinners, featuring heaping plates of pasta and Italian meatballs.  After she passed away, her mother Margie carried on the tradition.  She filled their house with the tantalizing smells of her cooking, but also with her kindness and warmth.  A stay-at-home mom to Marissa and her older brother and sister, Margie was the family’s rock.  Always ready with a hug or a kiss, she made sure that her children felt her constant love, even when their fiery tempers sometimes got the better of them.  When Marissa grew up and moved out of the house, Margie presented her with a huge batch of frozen meatballs to take with her.  Naming the T.E.A.L.® team walking in Margie’s honor after her signature dish seemed like a fitting tribute to an amazing lady so dedicated to nourishing and caring for her family.

Like all too many women, Margie was diagnosed with ovarian cancer after the disease had already reached an advanced stage.  In her early 70s, she and her husband were just beginning to enjoy their retirement and go on cruises together.  One day she was gardening, and then suddenly she was undergoing surgeries, chemotherapy, and radiation.  Soon it was clear that further treatments would not be effective.

Still, Margie never gave up hope.  She remained positive and upbeat even as she started hospice care.  Marissa and her two siblings took time off from their jobs, moved back into their childhood home, and cared for their mother during the last months of her life.  They learned all they could about ovarian cancer, including homeopathic treatments, and tried everything.  Throughout the ordeal, the hospice nurses were amazed at Margie’s cheerful attitude, her friendliness, and her faith that she would get better, despite all the medical equipment attached to her.  Before she got sick, Margie would never leave the house without makeup, and even in hospice, she continued to put on makeup every day.

Margie fought hard for about a year, but the end came quickly.  As her condition worsened, her faith became increasingly important to her, and she began saying the rosary multiple times throughout the day.  Her family would come in to join her, sitting around her bed while counting beads and praying.  During the last week of her life, Margie’s eyes remained closed, and her family tried to tell her that it was okay for her to let go.  On the day she died, her husband and children sat around her one more time, praying the rosary.  They spoke to her, telling her that they would be fine.  All of a sudden, Margie opened her eyes, blinked at them, and then closed her eyes one last time.  Marissa felt like she was telling them that she was ready to join her loved ones in heaven.  It was 2012, shortly after Valentine’s Day.

Marissa and her siblings were surprised when the line for Margie’s funeral wound around the block.  Although their mother had always been a socialite, they had no idea how beloved she was.  Despite their grief, they were pleased to see how far her reach had extended, stretching well beyond their family to include so many people at church and throughout their New Jersey community.

Marissa formed Team Margie’s Meatballs to keep fighting the fight against ovarian cancer on her mother’s behalf.  That first T.E.A.L.® Walk was an amazing experience.  All of her immediate family participated, creating a team of more than fifteen.  Marissa especially enjoyed the sense of empowerment she got from being surrounded by so many people who had gone through similarly heart-wrenching experiences.

Most of the time, it’s too hard for Marissa to think about losing her mother.  Still, she remains committed to the T.E.A.L.® Walk and Run and to raising money for ovarian cancer research.  In addition to better treatments, she hopes for better screening methods, better insurance policies to cover the costs of genetic tests, and greater awareness of the signs and symptoms of the disease, which include gastrointestinal complaints, abdominal bloating, and discomfort.

Marissa continues to feel Margie’s influence in large and small ways.  Shortly after her mother passed away, she suddenly became pregnant.  Marissa and her husband were convinced that the child would be a girl, a new life to help fill the hole left by her mother’s absence.  Both were shocked when the doctor informed them that they would actually be having a boy.  Although he was not the little girl they expected, Oliver, who’s now almost two, still feels to Marissa like a little gift from heaven from her mother.

Other signs of her mother’s ongoing presence are more nebulous, but no less meaningful.  During the last months of her life, Margie developed a love of the Beatles, a departure from the 1950s tunes she and her husband typically listened to.  The song “Let It Be” quickly became a favorite.  At the same time, Marissa and her siblings began teasing their mother and calling her an owl because of the funny faces she made.  After she died, Marissa’s husband brought home a pillow he had found at a nearby store.  Marissa held it, looking at the words “Let It Be” on the front.  When she turned it over, she was startled to find an owl on the back peering back at her and reminding her even more strongly of her mother.

So it was not altogether a surprise when a tornado struck at the T.E.A.L.® Walk in 2012.  Like so many people, Marissa has had her life profoundly shaped by cancer, a disease that can leave a trail of devastation in its wake.  With Team Margie’s Meatballs, she wants to help prevent other families from experiencing what hers did.  And on the occasions when she’s tried to carry on the tradition of big spaghetti dinners, she’s felt her mother’s spirit guiding her as she prepares the meatballs. 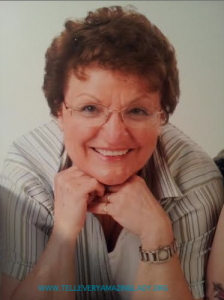