Sixteen-year-old Kiara Carrion is T.E.A.L.®’s first Youth Ambassador.  Her job is to make her generation aware of ovarian cancer and its symptoms, and she has challenged herself to tell every amazing young girl about the disease.

She first heard about ovarian cancer after learning that her older cousin Jennifer had gone through treatment and emerged cancer-free.  She did a lot of research on ovarian cancer and was surprised to find out that girls as young as eight can be affected.  She became involved with T.E.A.L.® through Jennifer, who has been a volunteer in the past. 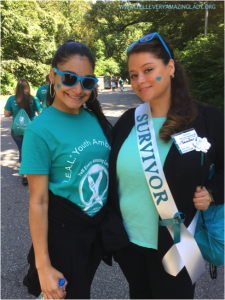 Kiara also competes in pageants, and at the most recent Miss Jr. Teen America, spoke about ovarian cancer as a cause that was dear to her.  She is currently planning a fashion show for September 2018 in New York City to benefit T.E.A.L.®  Through her company, named KITARA, she designs clothes and has already begun making a teal collection to be showcased that day.  Fashion, modeling, and making clothes are what Kiara loves, and she wants to continue using these skills as a platform in the future, to raise awareness of the symptoms of ovarian cancer in young girls and teens.

Kiara (right) at a fashion show for her label KITARA

Kiara has also made two public service announcements for T.E.AL.® and has volunteered at several events.

Pamela Esposito-Amery, T.E.A.L.®’s co-founder and CEO, and Kiara at the New York Stock Exchange to ring the opening bell

Kiara is glad that her cousin Jennifer has been in remission for six years now.  She’s very close to Jennifer, who she describes as a great person—amazing, fun, and loving—and considers her a strong role model.  She also thinks she’s a lot of fun to hang out with.

Kiara participated in her third T.E.A.L.® Walk this year on September 9 as part of Team Skylar.  The team, which Jennifer created, has grown from five members in 2015 to nearly 25 in 2017.  Kiara loves the feeling she gets when she’s at the T.E.A.L.® Walk in Prospect Park.  “Everyone’s really supportive of each other, and it’s a great atmosphere,” she said.  After the walk, family and friends go out to lunch and bond, contributing to a very important and special day.

Kiara would like to tell readers, especially those who are younger: “Make sure to learn and educate yourself more about your body.  You should know when something’s wrong or doesn’t feel right.  It can be uncomfortable to talk about, but don’t be afraid to speak out.”