Liz Tsaoussis is beating the odds.  Initially diagnosed with Ovarian Cancer almost four years ago, she has not let her intensive rounds of chemotherapy stop her from living life out loud.  A 57-year-old native New Yorker, she continues to work as Director of IT and Office Manager at the Children’s Museum of Manhattan.  She makes an extra effort to spend time with her family and friends, especially her children Eva and George.  Additionally, she also works part-time at a dog day care, is a passionate advocate for animals and shelter dogs, and has a German Shepherd rescue named Taki.

Liz believes her strong and unfailingly positive attitude, along with some ancient Greek Warrior genetics and an outstanding oncology team, are a fighting combination.  As she says, “Cancer is only going to be a small chapter in my life and not the whole story, probably just a footnote.”  In early 2015, she told her story in the following blog post:

Lines, Rounds, & Treatments   These three words have been thrust into my vocabulary these last three years. They have taken on a whole new meaning. Lines, Rounds, Treatments. This day 3 years ago my life was given back to me but with a short lease. I was diagnosed with Ovarian Cancer stage IIIc2—eight hours on the operating table with a surgeon who was meticulous, finding every little piece of tumor growth he could; even called in a cardiothoracic surgeon when he discovered a mass wrapping itself around my inferior vena cava, its precarious position was more of an immediate threat to my life than the rampant cancer. Had it not been discovered, hiding away from the surgeon’s direct sightline, I would have been dead by September.

I consider January 30th a new—a second birthday. I was given less than a 7% of survival to year one when my cancer returned within four weeks of completing my first line and first round of chemotherapy. Once completing this initial round I have never been without chemo for longer than 3 weeks. I now have a 20% survival rate for each year I live.

Line: a combination of chemos; so 2 lines is two different combinations. Once you have hit the 5th line without remission you are deemed to have a persistent/resistant and terminal form of cancer.

Rounds: how many times a series of chemotherapy is given—the standard is 6. This doesn’t mean you received chemo 6 times, some rounds have an A and a B cycle, or can last over a course of three days;

Treatments: the actual number of times I have received chemotherapy. For example, my ifosfamide/mensa was given to me while I was in the hospital over the course of three days. This line had 6 rounds but 18 treatments.

So here I am on my 7th line completing my 10th round for a total of 105 chemo treatments in 1,095 days. I am currently undergoing chemo every other night.

I am ignoring the survival rate percentages. Looking down the barrel of a ten year maximum anyone has survived my stage with remissions. . . I am remissionless. . .I am stubborn, my body is strong, my cancer is more obstinate and very smart—genetically shifting once it figures out the attacking chemical. It wants to survive…I want to survive…I am in a battle of will with my own body.

Tomorrow I’m undergoing a full body scan to map out the cancer. And tonight my numbers are 7th line, 11th round, 106th treatment.

I have events to experience, places to go, dreams to see to fruition. I am independent, I continue to work, I laugh and I cry, I love and I am loved, I am living life out loud.

During her first round of chemo, Liz began photographing her eyes to help her in applying makeup and brows.  The below series of photos evolved into a poignant art piece about the strength of a soul, as seen through the eyes of a warrior.  The piece captures good days, fun days, and days that courage refused to bend cancer.

During chemo, you’re more tired than you’ve ever been. It’s like a cloud passing over the sun, and suddenly you’re out.  You don’t know how you’ll answer the door when your groceries are delivered.  But you also find that you’re stronger than you’ve ever been.  You’re clear. Your mortality is at optimal distance, not up so close that it obscures everything else, but close enough to give you depth perception.  Previously, it has taken you weeks, months, or years to discover the meaning of an experience.  Now it’s instantaneous. 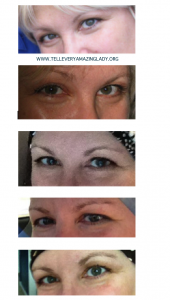 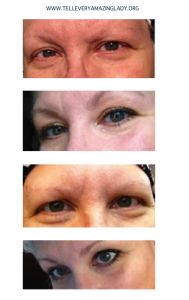 Liz initially found out about T.E.A.L.® through one of her children and participated in her first walk with T.E.A.L.® in 2013.  She also formed Team Artemis and marched the following year.  More recently, she attended the Meredith Vieira Show with T.E.A.L.® on October 15, 2015.  She was delighted to meet other amazing ladies like herself, who are battling Ovarian Cancer and finding many ways to inspire others through their courage, creativity, and love of life.