Katie Goldberg and her sister Judy Leavey became very close after they lost their mother, Isabella Friedland, thirty-five years ago.  And Katie’s daughters, Lisa and Abbe, have become even better friends after their mother passed away eight years ago.

Both pairs of sisters lost their mothers all too soon.  But now, the family is committed to telling every amazing lady about ovarian cancer.  They know how important it is to stay on top of your health, visit the doctor regularly, and catch symptoms as soon as they appear.  Today women are living much longer after being diagnosed, especially if the disease is detected early.

Katie and Judy, the first pair of sisters, grew up in Flushing, Queens in the 1960s.  Their mother Isabella was a stay-at-home mom, which was very common to the era, extremely devoted to her family, especially her daughters.  About a year before she and her husband moved to Florida to retire in 1980, she noticed that something was wrong.  Her doctor examined her gastrointestinal system with X-rays, but couldn’t find anything.  When she got to Florida, she continued seeing doctors.  CT scans were just starting to be used at the time, and results from one test led to a recommendation that she have a hysterectomy.  After the surgeons started the procedure, they found the cancer, which was already at an advanced stage.  Despite receiving chemotherapy, Isabella tragically passed away five months later at the age of 62.  Katie and Judy were in their twenties. 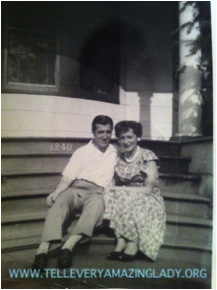 Katie went on to become a well-respected lawyer in Long Island, while Judy moved to a town outside of Boston and became a teacher.  Both were active in their communities and volunteered regularly, and each had two daughters.  And every year, Katie and Judy had blood tests to monitor their levels of CA125, a protein that can indicate the presence of ovarian cancer.

When she was forty-seven, Katie began experiencing vague symptoms, but she thought they were just a part of getting older.  Often the signs of ovarian cancer can be subtle.  Stomach trouble, bloating, cramps—many women experience this kind of discomfort as just a normal part of everyday life.  In the summer of 2001, Katie was diagnosed with ovarian cancer.  She consulted with multiple doctors to make sure that she was getting the best treatment possible, although she refused to let cancer become the center of her life.

A caring and intelligent woman who never sought out fanfare, Katie continued working until shortly before she passed away and remained very private and optimistic about her health.  Most people didn’t realize how sick Katie was, and she tried to shield her family from everything that was going on with her treatment.  She continued to focus her attention on her daughters, Lisa and Abbe, whom she loved fiercely.  Whenever one of her children called or came home from school, she would make a point to spend time with them and sound just like herself, no matter how tired she was from chemo.  A beautiful person inside and out, her most important priority was that her daughters felt loved, supported, and encouraged to do what they loved. 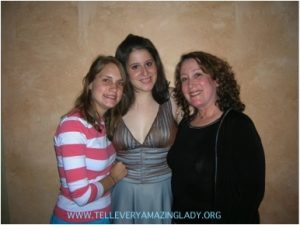 For five and a half years, Katie did everything she could to fight ovarian cancer and live her life.  She continued to be actively involved in the PTA, a member of her temple board, and a devoted friend, sister, and mother.   She passed away in February 2007.

Lisa and Abbe were very young when they lost their mother—Lisa was a sophomore in college, and Abbe was a senior in high school.  When they heard about T.E.A.L.® in 2011, they quickly became involved because this was a chance to do something proactive about a disease that had made them feel so powerless when their mother was sick.  T.E.A.L.®’s annual walk and 5K run gave them an opportunity to raise money for ovarian cancer research and honor their mom with family and friends.

Lisa, Abbe, and Judy co-captain Katie’s Good Eggs, now in its fifth year, and plan to participate with about 25 members at T.E.A.L.®’s 7th annual walk on September 12, 2015 in Prospect Park.  Since they started participating in the walk, the team has raised a total of $18,000 for ovarian cancer research, and they hope to surpass $20,000 this fall.  Lisa and Abbe use social media to reach out to their friends to let them know about ovarian cancer, share stories about their mom, and spread the word about the T.E.A.L.® Walk.  Judy, her husband, and her daughters Bethany and Jennifer drive down from Boston for the event every year, and family and friends from nearby and as far as Buffalo travel to participate in the event.  And every year, the team  goes out to lunch afterward to celebrate their hard work, a successful walk, and the woman who is at the center of it all: Katie. 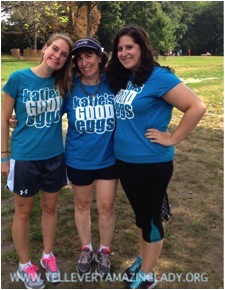 Today Lisa and Abbe, who are two years apart in age and both live in Park Slope, are even closer than when they were growing up.  Lisa works in social media at an ad agency, and Abbe is an assistant editor of children’s books at a publishing company, working with picture books through young adult.  They remember their mother as a superwoman—a person who could do no wrong—and look forward to honoring her memory each February around her birthday and each September at the annual T.E.A.L.® walks.

Lisa and Abbe like working with T.E.A.L.® because it’s a local, up-and-coming organization that is growing along with them.  They especially appreciate how its CEO and co-founder, Pamela Esposito-Amery, knows so many of the walk’s participants and their stories.  Their aunt Judy has been involved with many ovarian cancer organizations, including the Ovarian Cancer National Alliance, Ovations for the Cure of Ovarian Cancer, and the Ovarian Cancer Brigade, and she finds many different ways to help and support women with ovarian cancer.  Her goal is to increase awareness about ovarian cancer and promote early detection so that every amazing lady can live longer lives.

Judy, Lisa, and Abbe have all been profoundly affected by ovarian cancer.  But they have refused to let their experience stop them.  And together they are reaching out to help other women affected by the disease and are building an even bigger and stronger family than they had before. 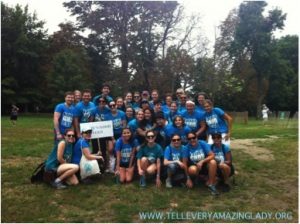