Ten years ago Robin Akdeniz confronted some of the biggest challenges she’s ever faced—and then completely transformed her life after getting through them.  First, her mother Bonnie passed away at the age of 69 following multiple recurrences of breast cancer.  Then she lost the second most important person in her life, her grandmother Helen, to kidney cancer a few months later.  Heartbroken, her grandfather passed away shortly thereafter.  And then Robin was diagnosed with Ovarian Cancer, a decade after having already battled breast cancer.

Robin was 39 when she had her initial struggle with breast cancer, back in 1996.  She had recently adopted two young daughters from Turkey, and with her husband’s support, decided to undergo very aggressive treatment—a double mastectomy followed by chemo.  Fortunately, the cancer has never returned.

When her mother’s health began to fail a decade later, Robin had genetic testing and found out that she was positive for an abnormal BRCA1 gene, which greatly increases risk for breast and Ovarian Cancers.  Having already fought breast cancer, she planned to reduce her odds of developing Ovarian Cancer by having preventive surgery to remove her ovaries—a procedure called an oophorectomy.  Yet she and her sisters were focused on caring for their mother in her time of need, so the surgery was temporarily delayed.

When Robin’s mother died in August 2005, it was the first major loss that she had experienced, and her world turned upside down.  When both of her maternal grandparents passed away soon thereafter, Robin was left stranded in grief, struggling to make sense of what had just happened.

At the beginning of 2006, Robin started to feel physically uncomfortable, but wasn’t particularly concerned.  Always careful to schedule doctor’s appointments and follow-ups, she noted some bloating and a loss of appetite.  For example, she and her husband attended a cooking class for Valentine’s Day, where they learned how to use chocolate in recipes.  Though a big lover of chocolate, Robin could not muster up much of an appetite.  On another occasion, she wore a long dress to an Academy Awards party and was puzzled as to why she seemed to be gaining weight despite not eating very much.

Robin saw her gynecologist, who thought that she had a ruptured uterine fibroid.  She went in for a routine hysterectomy and woke up three days later to a diagnosis of stage IIIc Ovarian Cancer.  Though devastated, Robin did what she needed to do because of her family.  Like a solider, without hesitation, she decided to undergo intraperitoneal chemotherapy—administered directly into the abdominal cavity—because she wanted the best treatment possible.  It was an ordeal—but Robin came through the other side, and the experience ended up changing her life.

Now Robin doesn’t take anything for granted—particularly things like the color of the sky, the presence of butterflies, or the smell of flowers.  She appreciates life more fully and doesn’t get caught up in minutiae anymore. 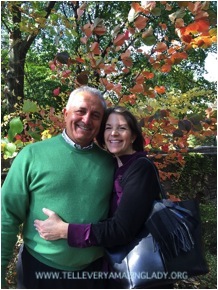 (Robin and her husband Yujel)

And after five years living cancer-free, Robin decided she wanted to do something especially meaningful in her life.  While her kids were growing up, she had been very involved in their academic and extracurricular activities.  As she faced an empty nest, she went back to school at the age of 54 and earned a Master’s degree in Social Work.  Determined to give back after having twice survived cancer, she started working in substance abuse, co-authored a book chapter with a former professor, and was invited to teach at Florida Atlantic University as an adjunct professor in social work.

Today Robin, a truly amazing lady, is a licensed clinical social worker who sees clients privately as a psychotherapist.  She’s also in her first semester of a full-time PhD program in marriage and family therapy, and she hopes to complete her degree in four years.  In her research and practice, she focuses on the importance of family.  And her daughters are doing great—Rebecca is in her second year of law school in LA, while Caroline is a junior in college, studying counseling psychology in Boston. 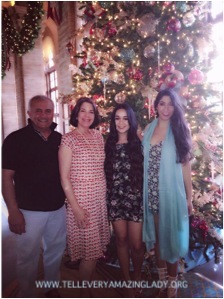 Robin became involved with T.E.A.L®. recently at its 7th Annual Walk/Run in Prospect Park.  Her sister, Jill Weinshank, who lives in New York, was also diagnosed with Ovarian Cancer several months ago, despite having previously received negative results on the BRCA test.  While Jill was undergoing treatment, her children organized a team of friends and relatives to participate in the T.E.A.L.® walk.  Robin flew up from Florida for the event and was delighted to learn more about T.E.A.L.® after she arrived. 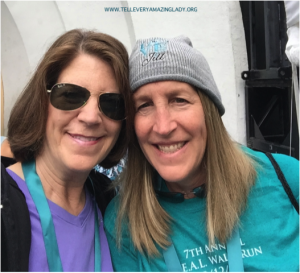 Cancer has touched Robin and many of her family members, but on a day-to-day basis, she remains very focused on living.  She looks forward to March 1, 2016—her tenth anniversary of being cancer-free.  She believes that her sister Jill will get through her treatment for Ovarian Cancer in the same way that she did herself.  And as she tells her clients in therapy, the only thing you can be sure of is that you’re here now—and while you’re here, you have to try to be the fullest person that you can be.