Lenny Greco feels very blessed to have had his mother in his life for the past 87 years.  He’s even more grateful since he thought he was going to lose her to ovarian cancer nearly 35 years ago.

Now 57, Lenny describes his mother Dolores as a beautiful, loving, and independent woman.  Although she has developed Alzheimer’s disease over the past few years, her story of survival against the odds is an inspiration to women struggling to overcome ovarian cancer today.

Born on May 29, 1928, Dolores Vitale Greco spent her working career as a nurse.  Her husband was a surgeon who also owned Italian restaurants in Brooklyn and Queens.  Lenny, an only child, is shown here in 1963 with his mother at one of his dad’s restaurants. 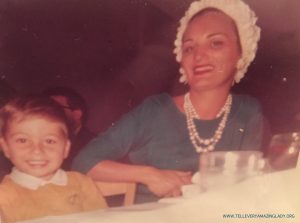 Dolores was diagnosed with ovarian cancer while in her early 50s.  Lenny was in Cape Cod for the summer and received a phone call from his grandmother to come home to New York.  When he arrived, his grandmother, who was also a nurse, told him that his mother looked nine months pregnant.  It turned out that Dolores was retaining fluid in her abdomen because of ovarian cancer.

Dolores began chemotherapy, but did not respond well to it.  She had a golf ball-sized tumor that doctors informed her was “spreading like crabgrass.” She was given only a month or so to live, and her family was advised to start making preparations for her passing.  Frustrated and unable to understand what was going on, Lenny took his mother’s hospital chart home with him to try to make sense of a horrible situation.

The turning point came when Dolores’ oncologist suggested that she try an experimental drug.  Her oncologist was committed to treating women with ovarian cancer, but most of her patients in the early 1980s didn’t survive because of a lack of effective therapies.  She had met with some success when giving patients in China a new drug that contained platinum.  Even though this medication was not sanctioned in the United States at the time, Dolores agreed to give it a try.

Dolores’s response was positive and dramatic.  Her condition immediately started to improve, and the months stretched into a year.  Dolores underwent surgery to remove her tumor, while Lenny and his family waited in the recovery room for her to wake up.  Lenny remembers this time as especially stressful.  The patient in the next bed had suffered a gunshot wound, and it was difficult to watch his mother emerging from anesthesia.

Yet the operation proved to be an unqualified success.  The surgeon, who happened to be a close family friend, told the Grecos that Dolores was completely healed, saying, “She’s a virgin inside.”  He had left one healthy ovary intact, and Dolores never underwent another surgery or round of chemotherapy again.

For the following 30+ years, Dolores has remained cancer-free.  Her courage in deciding to try an experimental drug, at a time when options were limited, is especially noteworthy and should give hope to patients nowadays who are interested in enrolling in clinical trials.  After her amazing recovery, she began accompanying the oncologist who had saved her life at lectures to let researchers know about the experimental drug she had tried.  Since that time, platinum-based chemotherapy has become part of the standard treatment for women with ovarian cancer.

A naturally thin woman, Dolores lost about thirty pounds during her battle with ovarian cancer.  As she recovered from the ordeal, she was delighted to discover that her hair was coming back with more body and with ringlets at the back.  She is shown here in 1993, about 8 years after her initial diagnosis.

Dolores was diagnosed at a time when our understanding of the genetics of ovarian cancer was still in its infancy. Since Dolores and her husband both worked in medicine, they tried to live very healthily, took a holistic view towards health, and always ate fresh food.  Dolores’ one vice was smoking, but it seems possible that genetics played a role in her disease.  Many years later, Dolores’ younger sister also developed ovarian cancer.  She fought hard while undergoing multiple operations and rounds of chemotherapy, but ultimately passed away.  Lenny’s cousin has also recently developed ovarian cancer, in conjunction with other serious medical problems.

Women with a strong family history of ovarian and/or breast cancer should consider genetic testing to determine whether they have a mutation in the BRCA gene or carry the gene for hereditary nonpolyposis colon cancer.  While Dolores’ story is proof positive that women can survive ovarian cancer for three decades or longer, genetic testing can help catch the disease early on, when the chances for long-term survival are much higher.

Dolores is an inspiration to us all, and we hope that you will TELL EVERY AMAZING LADY® about her extraordinary story. 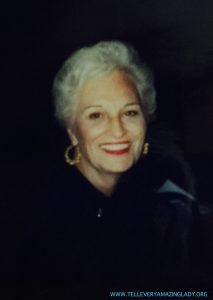