On September 12, 2015, the day of T.E.A.L.®’s 7th Annual Walk/Run, Diane returned to visit her childhood neighborhood of Park Slope for the first time in 27 years.  The occasion was especially meaningful because she had also battled Ovarian Cancer two years before and was glad to be raising awareness along with other survivors and amazing ladies.

Diane grew up near Prospect Park, taking violin lessons at the Brooklyn Academy of Music.  Her family moved to New Jersey in 1973, although they returned to visit her grandmother until 1988.  Even though Diane has lived most of her life in New Jersey, she still considers Brooklyn to be her home base and is proud to be a Brooklyn girl. 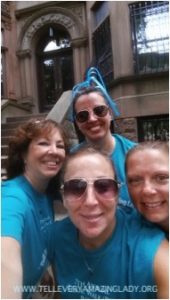 (Diane and friends outside her childhood home)

On the morning of the walk, she woke up filled with mixed emotions.  She drove into Brooklyn with a few of her friends, and it was just like riding a bike.  She hadn’t forgotten how to get there.

Walking into Prospect Park brought back beautiful memories of her childhood with her parents and grandmother, who have all since passed away.  She stood watching all of the survivors of Ovarian Cancer and the signs and shirts honoring those who have been lost, while also remembering how she used to play in the park and go sledding during the winter.  Overwhelmed with emotion, she thanked God for giving her the gift of life and allowing her the opportunity to see her old neighborhood again. 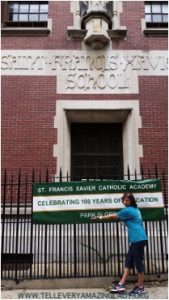 After the walk, Diane and her friends took photos in front of her former brownstone home on Garfield Place, stopped by PS 321 where she attended kindergarten, saw St. Francis Xavier where she was baptized and went to school until the 4th grade, and had lunch at Pino’s Pizzeria, an old haunt.  One of the best moments was when two young women from a T.E.A.L.® team, Katie’s Good Eggs, saw them trying to take a selfie in front of her grandmother’s old apartment over Tarzian Hardware and stopped to take their picture.  T.E.A.L.® brought Diane back to Brooklyn, and it was an experience she will never forget. 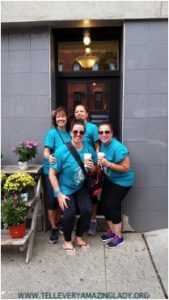 Today, two years after being diagnosed with Ovarian Cancer, Diane’s life is coming full circle in more ways than one.  As a young high school graduate, she had hoped to become an arts therapist, but financially it didn’t make sense at the time.  For many years, she worked as an administrative assistant to make a living, while raising her two daughters, Rachel and Sarah, who are now 20 and 25.  And she continued to pursue her love of art by painting and doing pencil portraits.

In 2009, Diane decided to take her dreams to the next level and enrolled in a visual arts associate’s program at Raritan Valley Community College.  Although she had to take two years off because of Hurricane Irene and chemotherapy, she is now enjoying being in school in the evenings.  A recent photo project she created won best in show at her college, and she is working in new media, including graphics, sculpture, metalwork, and figure drawing.

For all the amazing ladies who are fighting Ovarian Cancer, Diane wants them to know that we are a lot stronger than we give ourselves credit for.  Never give up, and reach out to the great network of survivors and supporters who exist.

For the amazing ladies who are healthy: always get yourselves checked—there’s a reason that annual doctor’s visits are recommended.  Listen to your body, and don’t ignore anything that doesn’t seem right.

And for the amazing ladies and supporters trying to raise awareness for ovarian cancer: Let’s push for more screening and early detection.  We need more advocates fighting the fight. 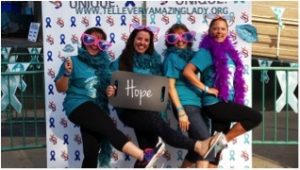