Team Babster has participated in every Tell Every Amazing Lady (T.E.A.L.®) Walk since the first one it held in 2009. That year, Becky Hisler learned about T.E.A.L.®’s efforts to raise awareness and research funds for ovarian cancer on a celebrity news site. She knew immediately that she wanted to get her family involved to honor her aunt Barbara, who had always played such an important role in her life.

Barbara Tull was an outgoing and caring woman who was not afraid to tell it like it is. Kindhearted, funny, and witty, she always maintained an open-door policy, with plenty of food on hand for any relatives and friends who happened to drop by. As a teenager, Becky was a frequent visitor to her aunt’s house in Westchester, where she would hang out with her cousins, Craig and Marc. Since she was little, people would always tell her that she and Barbara looked a lot alike.

Barbara worked at a business owned by Becky’s father, a baseball card show promoter. In charge of operations, she would see that the shows ran smoothly, chat with the baseball players, and make sure they got paid for signing autographs. On her days off, she would crack jokes with her best friend. Since the two often dressed alike, people liked to refer to them as the “dynamic duo.”

Barbara loved her two children more than anything in the world and would always try to spend time with them. Marc especially remembers his mother’s warm sense of humor and her ability to make people laugh. She was the kind of mom who would chat with her son and his friends, while bleaching their hair and teasingly inquiring about their romantic lives.  But she wouldn’t just be giving them a hard time—she really cared about what was going on and made sure to listen.  Her openness and sense of fun made it easy to trust and confide in her.

Everything changed when Barbara was diagnosed with ovarian cancer in July 2002.  She underwent an all-day surgery to remove a massive tumor, then months of chemotherapy. After a brief period of remission, she was told that her cancer had returned in August 2003, while she was on vacation with her family in Baltimore. She was hospitalized shortly before Halloween, and during a second surgery, her doctors discovered that her cancer had spread to her stomach and intestines. She woke up briefly after the surgery, then fell into a coma. She passed away on November 15, 2003 at the age of 51. Marc was 15 at the time, Becky was 18, and Craig was 21.

Barbara’s passing hit her sons hard, but they got through the ordeal with their family’s love and support. Craig and Marc had previously fought a lot, but grew much closer after losing their mother.  On special occasions, such as Craig’s wedding a couple of years ago, the entire family always makes sure to think of Barbara and keep her in their hearts.

The annual T.E.A.L.® Walks have been an important way to bring family and friends together to remember Barbara. Since 2009, Marc, Becky, and Craig have tried to get as many of their friends as they could to join Team Babster and donate money for ovarian cancer research and awareness. Over the years, Team Babster has raised thousands of dollars and numbered up to 20 participants—and they always have a fun time. The cousins compete to come up with creative ways to raise money, and once Craig dyed his hair teal to reach his fundraising goal. The team wears special T-shirts and matching sunglasses, and they make a tradition of going out to a local restaurant for pizza.

Last year’s event was especially meaningful. It marked Team Babster’s fifth year with T.E.A.L.® and the tenth since Barbara’s passing. In honor of the occasion and inspired by Barbara’s own strength and fortitude, Becky set a goal of running in the T.E.A.L.® Run, her first ever 5K. Although she’s never been a runner, she came in under her target time of 40 minutes, while her father, an avid marathoner, joined her at the end to cross the finish line.

For this year’s event, scheduled for September 6, 2014 in Prospect Park, Brooklyn, Becky plans to participate in the 5K run again, before joining her family and friends in the walk. Marc made a video about his mom so that people who never got a chance to meet her can learn a little more about the amazing lady who inspires all of Team Babster’s efforts. And the cousins will be sure to keep Barbara’s memory alive on that day and every day after. 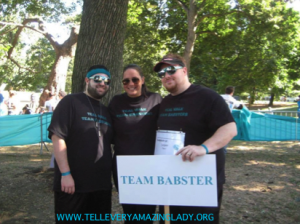 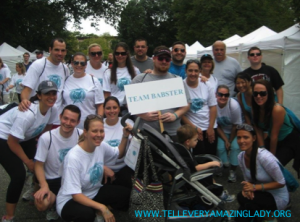