During September, which is National Ovarian Cancer Awareness Month, the YWCA Greenwich provided education and awareness about this terrible disease by holding a lecture on September 26 and also publishing an article on their website: http://www.ywcagreenwich.org/ywca-greenwich-and-teal-raise-awareness-about-ovarian-cancer 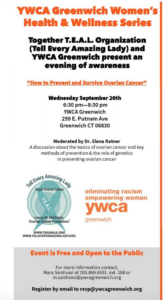