On September 27th, Yankees Manager Mr Joseph Girardi spoke with the press about Wednesday’s game against the Tampa Bay Rays, but first spoke about a cause close to his heart-Tell Every Amazing Lady.®. He described the founding of T.E.A.L.® and the need for an organization focused on Ovarian Cancer, as well as spending time raising awareness about the need for early detection, since when caught early, 92% of diagnoses can have a 5 year survival rate. This was part of Joseph’s initiative to raise awareness for a host of different organizations in the NYC metro area. Each week, he will wear a different charity’s shirt, and return the shirt with an autograph to encourage fundraising. About this initiative, he says “There are a lot of organizations that deserve recognition and help because they’re helping others, so if you can bring some light to their cause, and it tugs on somebody’s heart, it’s a good thing.” 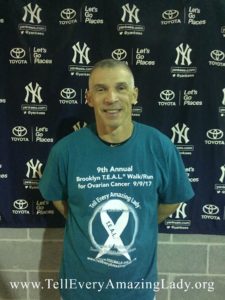 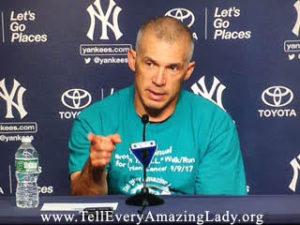