In 2014, T.E.A.L. was proud to support 5 research studies and 2 survivor programs in addition to the internal work that T.E.A.L. already does locally and nationally throughout the year to promote awareness, education and support for survivors.

University of Penn School of Veterinary Medicine /Abramson Cancer Center/ PennVet Working Dog Center: In 2014, T.E.A.L. helped fund studies at PennVet Working Center in which dogs are trained to perform odor detection in human samples from patients with both malignant and benign ovarian cancer. They are achieving a 90% accuracy in identifying cancer plasma vs. normal. $5000 was donated towards this work from T.E.A.L.

Visit www.tealwalk.org/beneficiaries for more information and to view our Interact Map. 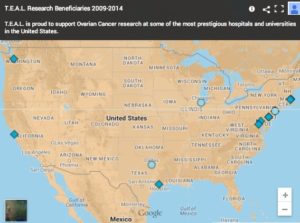