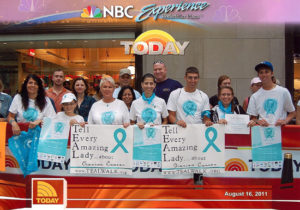 Pamela and the T.E.A.L. volunteers were out in force on August 16, 2011’s airing of NBC’s Today show.  Assembling in the crowd at NYC’s Rockefeller Center in the wee hours of the morning, they were able to get the attention of Al Roker and appeared in a live shot on the show.  Volunteer Pasty Gentile gained her 15 minutes of fame by speaking on T.E.A.L.’s behalf live in front of millions.  The clip can viewed on T.E.A.L.’s YouTube page by clicking here: