T.E.A.L. brought this year’s incredibly successful Ovarian Cancer Awareness month to a close by participating as the featured organization at the National Conference of Puerto Rican Women (NACOPRW) Teal Tainas Ovarian Cancer Awareness event at Brooklyn Borough Hall. The event brought many cancer organizations together including Chemo Comfort Inc., Susan G. Komen, Gilda’s Club, Beating Cancer in Heels, and Share in order to educate women about Ovarian Cancer, and other cancers affecting women. The event targeted Latina women in the Brooklyn community who are often at an increased risk of Ovarian Cancer. At the event, T.E.A.L. was presented with a $1,500 check from NACOPRW who fundraised as a team at the 6th Annual T.E.A.L. Walk/Run. 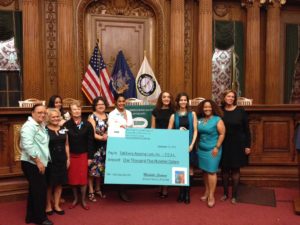