T.E.A.L.®️ participated in North Flatbush BID’s “Make Music New York Remote” digital event on June 21st! The event was hosted by North Flatbush BID through a Zoom meeting, and was live streamed to Facebook for the public to access.

Businesses along the Park Slope thoroughfare were invited to speak briefly about their business, which was then followed by a musical performance.

T.E.A.L.®️ has long been a partner with North Flatbush BID and its businesses, turning the Brooklyn stretch teal by tying ribbons on trees ahead of September’s National Ovarian Cancer Awareness Month. We had the opportunity to speak about our mission to support survivors of ovarian cancer and educate the public about this disease. T.E.A.L.®️ Youth Ambassador Kiara spoke about her work with T.E.A.L.®️ to increase public awareness about ovarian cancer, including most recently making and donating ovarian cancer-themed masks to the foundation.

About 700 people tuned in. Thanks to everyone who watched! 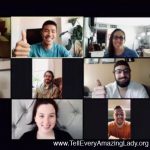 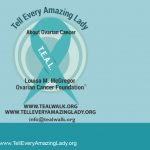