The first ever T.E.A.L Walk for Ovarian Cancer at the White Memorial Conservation Center in Litchfield, Connecticut raised over $2,000 on Sunday, October 12th, 2014. Hosted by Hope Assembly #46.org (International Order of the Rainbow for Girls) and organized by Darlene in honor of Lisa, this event and further fundraising efforts planned for the future, demonstrate the power and unity of a small community in the fight against Ovarian Cancer and the strength of families who have been touched by the disease.  Thank you again to Hope Assembly #46! 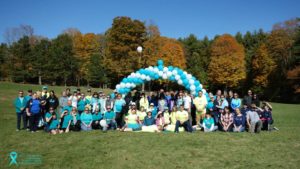