Want to keep running towards a cure even after the T.E.A.L. Walk/Run is over? Start a virtual fundraiser benefiting T.E.A.L. for any event you do! That’s what T.E.A.L. supporters Grant, Kim, and Alex did in one of T.E.A.L.’s most successful Virtual Fundraisers ever. They  raised $5,589 in memory of Rachel Small, who lost her battle at 21 years old from Ovarian Cancer. Check our their fundraising page and their story here 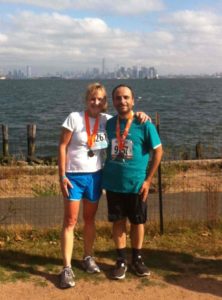 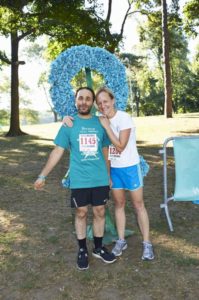 We asked them a few questions about their experience. Here is what they had to say about the day:

Tell us a little bit about the day. What was the event like? How was the weather? Have you ran a half marathon before?It was a beautiful day, we were both excited and nervous, Alex, one of our team members dropped out because of an injury. He was the reason we decided to raise funds for the run, so we were disappointed he couldn’t make it. Kim had run marathons before, but when she was much younger. I had never run that far, but I couldn’t back out and let T.E.A.L. down.

Why did you decide to run the Staten Island Half Marathon? The timing was right, it looked like a nice route and it fit our training schedule.

Why did you choose to run for T.E.A.L.?
Because some people close to us lost loved ones to ovarian cancer and we think raising awareness is really important. We also did the T.E.A.L. 5K this year but signed on too late to raise money for it, so we decided to fund raise at the SI half.
What does the color teal mean to you?
It means raising awareness about crucial early screening and showing support for all the families that have lost someone to OC. We called ourselves Team Rachel after our friend Rachel who passed away from OC at 21.
Did you have fun?
It was fantastic, we loved it and now plan to do a half marathon in every borough.
Grant, Kim, and Alex fundraise for T.E.A.L. at the Staten Island Half Marathon2013-10-222019-01-23https://tealwalk.org/wp-content/uploads/teallogo2018.pngT.E.A.L.® Walk | Tell Every Amazing Lady®https://tealwalk.org/wp-content/uploads/resizegadnkstatenislandresize-copy.jpg200px200px
Categories
Recent Posts