The 2009 # 1 grossing band Bon Jovi has donated an autographed electric guitar to T.E.A.L.Tell Every Amazing Lady About Ovarian Cancer, Louisa M. McGregor Ovarian Cancer Foundation and it will be auctioned in support of Ovarian Cancer Research.

Ovarian Cancer is the deadliest form of a gynecological cancer. The auction will take place at the 9th Annual Evening of Laughter in Tribute to Madeline Kahn (the beloved actress died of ovarian cancer in 1999) at Carolines on Broadway, NYC May 11, 2010. To purchase tickets, please call Ovarian Cancer Research Fund 212-268-1002.

The guitar is metallic blue and pearlized white. It comes with 3 picks and a case. It is signed by all 4 band members, Jon Bon Jovi, Richie Sambora, Tico Torres and David Bryan.

COME ON BON JOVI FANS WE KNOW YOU’RE OUT THERE!  Help us find a cure! 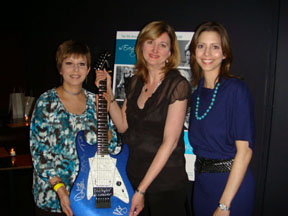