Lisa Brun Cosgrove was first and foremost a servant. She grew up as a member of the International Order of The Rainbow for Girls, a Masonically affiliated service based organization for girls between the ages of 11-21.  She held multiple different leadership positions within the order. She was involved in Girl Scouts for several years. She was very musically talented, as she both sang and played the piano as well as most reed instruments. With her singing she performed in the church choir, as well as multiple different groups within school. While she was in college she met the love of her life, Jim.  While Jim didn’t share her vocal abilities, they both enjoyed different types of music together. Shortly after graduation, the two of them were married, and remained that way for 31 years. Lisa and Jim took some time to settle into their careers as they began their family. They had three children together, who would grow up as servants as well. Jim settled into a career as a professional firefighter, Lisa finally became a fourth grade teacher. Justin, the oldest child, would grow up to join the US Navy as an aircraft director after graduating from Norwich University as a Civil Engineer, and marry a lovely young lady named Sarah Beth. Kelsey would grow up to marry a young man by the name of Stephen who would become a US Marine, after graduating from Delaware Valley College with degrees in large animal science and dairy science. They would go on to start their family with a boy and a girl. Marissa would grow up to become engaged to a US Airman, after graduating from Mitchell College with a degree in human development and family studies.

Through all of this time and all of these changes, the one thing that was always a constant was Lisa’s will and desire to serve all those around her.  She was the Mother Advisor for the local assembly of the International Order of the Rainbow for Girls, which both Kelsey and Marissa became majority members of. She was the Scout leader of the local Girl Scout troop, which both girls were also involved in. She helped out at every Boy Scouting event that Jim as the Scoutmaster, and Justin as an Eagle Scout, were involved in. She helped out at all the local agriculture fairs where the girls, who were the County leaders of the local 4H club, competed. She served as Wife, Mother, Mimi, Daughter, Sister, Teacher, and leader.

Lisa was diagnosed in June 2014 with stage IV ovarian cancer. She was never very uncomfortable at all, she just felt a little bloated, until one day when Jim came home from work, and she turned sideways and said, “look at this, I look as if I’m eight months pregnant.” Jim took her to the hospital where she ended up being diagnosed. When the oncologist told her that she needed surgery immediately, Lisa’s reaction was, “well, it can’t be for at least a week, I have 100 people coming for Marissa’s High School graduation party!” The oncologist immediately understood Lisa’s priorities in life, and after two paracentisis over the next week she made it into surgery, where she underwent a complete hysterectomy, and debulking. Lisa was out of school until January 2015 when the students returned from Christmas break. That was the only long term period she was out for the next five years.  She was in and out of chemo multiple times where she and Jim became friends with everyone, as Lisa determined this would be classified as “date day.” The nurses actually used to move them around so they would be near someone having a bad day.  Before the end of the treatment session they would all be laughing. One day a lady said to Lisa, “how can you be so happy?” Her answer—”Hope and Faith!”

Soon thereafter, Lisa had genetic testing and found out that she had a mutation in BRCA2, one of the two BRCA genes known to increase the risk of breast and ovarian cancers.

Still, had Lisa known earlier in her life that she carried a BRCA2 mutation, she may well have opted to undergo one of the procedures that could have been risk reducing.  And she would have wanted to tell every amazing lady® with a family history of breast or ovarian cancer to get genetically tested. Since there is currently no screening test for ovarian cancer, it’s important to understand a person’s risk and possibly family history of ovarian, breast or colon cancer, which can increase the risk of ovarian cancer.

Lisa considered herself to be lucky to hear of this organization called T.E.A.L.®, and proceeded to Tell Every Amazing Lady® about ovarian cancer any way she could.  Her Rainbow assembly chose to institute the first annual Litchfield T.E.A.L.® Walk in September of 2014, where we raised about $1,500. Lisa was so pleased to be able to walk the whole thing. She not only participated in the ensuing five Litchfield T.E.A.L.® Walks, but actually took the reins and ran the fifth walk in 2018 herself as the Mother Advisor of the Rainbow Assembly. Jim remembers her telling him how pleased she was to be healthy enough to run the fifth walk. In July of 2019, Lisa received the news that there were no further treatment options available. In true Lisa style, she handed the reins of the T.E.A.L.® Walk over to Marissa, and told her it was her turn to serve this worthy cause. Lisa was able to walk in the sixth Litchfield T.E.A.L.® Walk in September, with a couple of breaks, but she did walk. Between the 2018 and 2019 Litchfield T.E.A.L.® Walks, over $20,000 was donated to T.E.A.L.®! Lisa’s decline was rather rapid, as the cancer attacked her digestive system. She went into hospice in the hospital for eight days, where she passed peacefully in her sleep at the age of 53, on October 27, 2019.

This year, 2020, Marissa has joined together with Hope Assembly once again; to host the seventh annual Litchfield T.E.A.L.® Walk. This year, our goal is to get the whole town involved in Litchfield, CT. Lisa’s dream was to bring more knowledge to Litchfield and everywhere she went about ovarian cancer. She wanted to have the businesses in the center of town support this by putting up different teal objects in the storefront windows, as well as posters. Marissa has been speaking with the First Selectman to figure out how to make Lisa’s dream come true. When Lisa was physically present for the walks, Marissa, the team captain, made the team name “Teal We Find a Cure,” because Marissa and her family will walk and keep hosting this walk up until and beyond when a cure is found. Hope Assembly’s goal is to make this walk the largest walk Litchfield, CT, has seen. This year’s walk for T.E.A.L.® will take place on September 19th, 2020 at Litchfield Community Field in Litchfield, CT. The walk will begin at 11 am with registration starting at 10 am. For more information, feel free to contact Tell Every Amazing Lady® at info@tealwalk.org or visit www.tealwalk.org/litchfield. 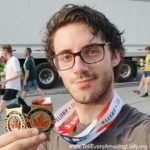